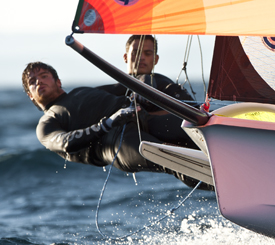 The fastest sailing class at The Olympics is the 49er skiff dinghy event, and there are two, young Maltese sailors who could make the grade to compete next year. Seb Ripard and Benji Borg have been sailing since childhood and ever since competing representing Malta on the international circuit forÂ  The Optimist Class, Laser and 49er categories. They have also competed in the Middlesea Race, in fact Seb was a crew member of the yacht, Jammin, that won the overall competition in 2002.

Having teamed up in late 2009 to sail in the 49er class, they competed in their first ISAF circuit in 2010. Having trained hard over the 2010/2011 winter season, both on and off the water, the have worked on every skill needed to sail the boat, and have shown a vast improvement.

The Malta 49ers are spending the summer training and racing all over Europe in a bid to qualify for the 2012 London Olympics. RLR Yachting is one of their sponsors, and is helping to fund their training and activities over coming months.

You can read more about the Malta49ers on their website; http://www.malta49er.com/

Next »
Browse: Home / The Malta49ers bid for Olympic qualification